Andy Amrhein brought up some good point about Relays as Cutoff switches at the summit, which he expanded on via email and I am reposting below:

I was a little surprised by the decision to ban relays/contactors for battery disconnect switches. It seemed like this change came out of the blue (was not in the 2019 rules that went around and I don’t believe it was mentioned at the summit in late 2019 but my memory isn’t the best). When I argued it at the summit, it seemed that everyone was in favor of banning relays/contactors as a battery disconnect device even though several cars are currently using this design. After the issue had been decided at the summit on Sunday, one of the people proposing the change made a comment that indicated a lack of understanding of the principles of using a contactor as a battery disconnect (they said that a battery problem would prevent one from turning off the power in an emergency). In any application where the contactor is used for emergency or safety disconnect purposes, a normally-open contactor is always used so that loss of power causes it to open and disconnect power. This also means that multiple safety-stop devices could theoretically be wired in series so that any one of them can turn off power. Attached is a quick schematic of a typical electrical system using a contactor to disconnect battery power.

I understand that sometimes simplicity is best in Powerwheels, but the use of a contactor for E-stop battery disconnect is actually potentially safer in some cases and is common practice in golf carts, go-karts, forklifts, and electric cars. In a “typical” setup, the contactor would be located as close to the battery, fuse, and motor controller as possible to minimize the length of high-power wiring. The main advantage is that you don’t have to run high-power wiring to the accessibility-convenient location of the E-stop switch. This reduces extent of high-power wiring in the car and therefore reduces the risk of hazards associated with damaged wiring in a crash or from wiring getting mutilated by steering linkages or rotating tires. Because the E-stop switch only has to carry the contactor coil current, this circuit can be protected with a much smaller fuse to limit the energy present in a fault. It also reduces losses associated with the increased length wiring carrying motor power. The only potential issue is the event of severe damage where insulation was simultaneously damaged on two wires going to the E-stop switch and they were shorted to each other or through un-grounded chassis. With the direct switch, the short would need to carry the full motor current in order to prevent the motor from being stopped by the E-stop switch. With the contactor, the short would only need to carry a fraction of an amp to keep the relay on. However, I would argue that the potential hazards of damaged high-power wiring are more of a concern than the thoroughness of the resulting short impacting the ability to disable the motor.

I have no objection or safety concerns to anyone using a direct-wired E-stop switch, however I don’t see any overall safety advantage to not allowing relays/contactors. If it was always practical to locate the E-stop switch close to the battery and motor controller, I would be less critical of banning relays/contactors (as complexity is generally a bad thing in Powerwheels). However, the E-stop switch needs to be as accessible as possible to anyone in or out of the car and I would be wary of not allowing something that increases the convenience of doing such. Although there are likely other options out there, there was only one “big red button” that was rated for high current at 48V that anyone attending the summit was aware of. There are thousands of suitable contactors available due to prevalence in golf carts, industrial vehicles, EVs, and EV DC fast-charge infracture, although finding something under $50 is almost as hard as finding a direct high-current switch rated for 48VDC. There are also a lot of second-hand options from scrapyard golf carts and forklifts, as well as included in a lot of the EV battery packs we have been disassembling for PRS purposes (although those are slight overkill).

Although it has never been needed (aside from hard-resetting a motor controller on the track multiple times), SuperBug has a thumb switch that is also wired to the contactor in addition to the E-stop button so that the driver could kill power to the motor without even having to take a hand of the handlebar to hit the big red button. It should be noted that the location of the E-stop switch on Weinermobile was the result of the decision to not use a contactor and the impracticality of routing heavy-gauge wire up to the handlebars with the control wiring.

Unrelated to the relay/contactor ban, but the 2020 rules had also added language insisting that the battery-disconnect switch be located on the positive battery lead (just like the relay/contactor ban, I have never heard this before the 2022 summit). Although I have no argument against it, there is absolutely no technical reason for this. Even if the negative lead of the battery was tied to chassis (not common on most modern motor controllers), placing a disconnect switch between the negative battery terminal and the rest of the electrical system (including chassis) would still remove all power from the vehicle. Besides, what if it is a positive-ground system?

What is everyone’s take on this? (won’t be offended if conclusion is that I am crazy)

I generally think the proposal is sound and I appreciate the time and effort Andy put into the explanation here as well as at the summit. I think that part of the rules, aside from safety, is to make certain aspects of the cars predictable and understandable to a reviewer (ie it does not need to be reversed engineered or tested to find if something meets expectations) - so from that vantage point I’d say some specificity is preferable.

If this were to go forward I’d want to get some basic understandable clauses to discuss putting in the rules:

-At least one estop must be easily accessible to the driver (at arm length) while seated in driving position and to a track marshal (direct line of sight).

-Only ground may be tied to Chassis (aka chassis ground).

What are people’s thoughts on this as a proposal?

I use a relay for the battery disconnect and think they should remain an option and agree with what Andy said.

I think this is more safe because you only hit the reset when you are sitting in the seat ready to go. Other setups apply power when the switch is reset or the battery is hooked up. This can catch you off guard if a throttle is stuck or something.

I am not saying that we should mandate seal in circuits. Just providing and addition advantage of allowing contractors.

As far as part numbers of possible contactors for E-stop disconnect purposes:

Altran Magnetics ALEV50 and ALEV100 are probably the most suitable for PRS vehicles within reasonable cost (starting at $30 or $32). They are somewhat new and I have not used them yet but I recently got a couple for testing purposes. 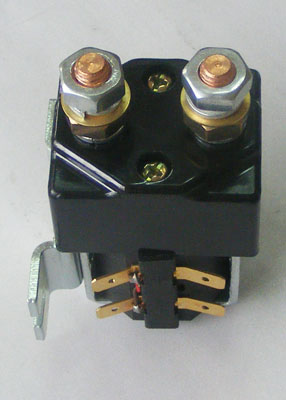 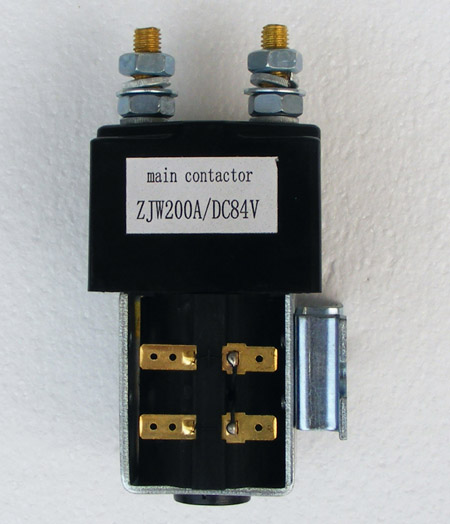 I have put a lot of time on a Gigavac P195FDA with no problems. Price has almost doubled in last 6 years (now $83) and they have recently got weird/difficult with non-commercial buyers.

There are a lot of overkill contactors out there that are a out of practical PRS price ranges new but are readily available used from scrap golf carts and such.

Main thing on contactors is to avoid reversing contactors and starter relays as they are not intended for continuous coil operation. AND NO LATCHING OR NORMALLY-CLOSED CONTACTORS.

As far as conventional direct battery-disconnect switches I am not sure I would recommend they type normally sold for conventional auto racing battery isolaters as they are intended to disconnect power to remove all potential hazards in a vehicle and not necessarily to interrupt load current. For an electric vehicle application, the E-stop switch should be designed/rated to actually interrupt high currents. The most likely cause for someone to use the E-stop button in PRS seems to be a runaway car or other throttle malfunction where the motor is running uncontrollably. I will do some research and post some parts that are designed for this applcation (they do exist - Weinermobile has one and it wasn’t super expensive).

They don’t have a lot of documentation and don’t list rated voltage, but there are a couple E-stop switches on the Kelly Controls website that I would possibly be comfortable with. 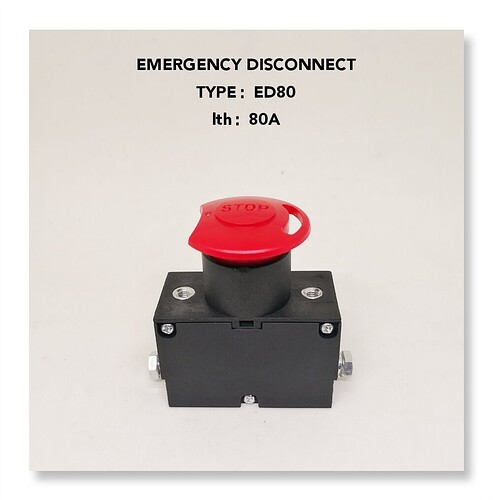 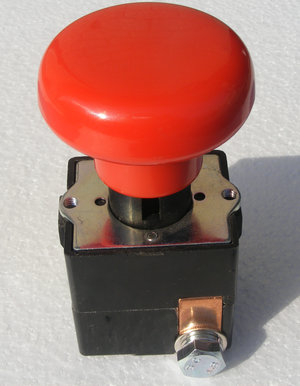 I agree that there definitely needs to be some guidance in order to ensure that the safety disconnect functions as required and can be easily understood during tech inspection.

I would propose the rule reading something like:
“The battery disconnect switch must either A) directly disconnect all battery power from the car or B) open the coil circuit of a normally-open electromechanical (not solid-state) contactor that in turn disconnects all battery power from the car. If using a contactor, the one or more E-stop switches must directly open the coil circuit, regardless of whether E-stop button operates a conventional on/off circuit or disengages a seal-in/latch-in circuit. A break in any part of the circuit must result in power disconnection and any of multiple E-stop switches must disconnect power regardless of the status of the others. Additional circuit configuration details… Approved disconnect switch or contactor model numbers are …”

I am Andy Amrhein, just in case there is any confusion.

That seems like a nice part for the money.

Honestly although I truly believe one could simply use a contactor, BMS input, etc. from a pure safety standpoint it probably makes sense that the series just standardize on a cutoff solution. This makes it easy to police and most importantly easy to use in the case of an emergency. Any worker, or participant can operate any vehicle.

I agree with the fact that having a shorter distance of “higher power” wire is always good. I also agree that some sore of standard part or parts being mandatory is a decent idea, easily policeable, etc…

As a summary, it looks like there are two schools of thought on this issue.

My personal vote is to allow (normally-open) contactors for E-stop/battery-disconnect/kill-switch/whatever-you-want-to-call-it purposes.

To my knowledge, all of the times that a power-disconenct-device had to be used in an emergency so far have been due to either a runaway car/jammed throttle or uncontrolled motor after crash-related damage. In all of these cases, ease/speed of accessing and operating the switch was of utmost importance. Here, anything that allows more convenient switch location(s) is beneficial.

We already have a voltage limit to minimize electrical hazards. If you have the proper fuse and use proper wire size, then there shouldn’t be much fire risk in event of vehicle damage.

If we want to have two potentially-discrete disconnect mechanisms, then that is another story. Battery-Disconnect: Used to render the car safe for maintenance or handling and is a switch that directly disconnects the battery. E-Stop Button: Used to stop a runaway car, other hazard associated with uncontrolled motor, or fire hazard after major damage (goal is to be as easy and universal to access/operate in an emergency as possible).